Home
Articles
Should Towns Be Allowed to Ban Marijuana Businesses?

Should Towns Be Allowed to Ban Marijuana Businesses? 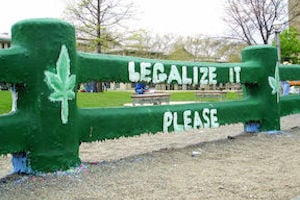 It’s been a little over two years since 56 percent of Washington residents voted to legalize the recreational use of pot.

Supporters of the bill celebrated—but with some reservations. Because marijuana is still illegal under federal law, it’s been a rocky road for citizens and businesses who want to buy and sell marijuana.

The ink on pot regulations had barely dried when thousands of applications to sell marijuana (3,700 by January 2013, by the Huffington Post’s count) came in. Marijuana businesses are soon to open in cities across Washington, including 21 in Seattle, according to the Seattle Times. The Times reports that the state will license 334 pot stores.

Marijuana retailers won’t be able to sell in some parts of the state, however. According to Reuters, several Washington state cities have already banned marijuana businesses, largely on the grounds that the drug is still illegal under federal law.

The 34 applicants who applied to operate marijuana businesses in Yakima are surely disappointed: in late January, the Yakima City Council voted overwhelmingly, six to one, to ban marijuana growers, processors, and retailers from operating within the municipality limits.

In addition to the city of Yakima, Pierce County and the cities of Wenatchee and Mossyrock have also prohibited marijuana.

One member of the Yakima City Council stated the federal law as the reason that the city outlawed marijuana businesses: “I don’t buy into somebody saying that we’re just going to ignore that law.”

Proponents of marijuana businesses, however, are worried that allowing local bans will reduce the revenue the state has expected to generate and will allow the black market for the drug to continue.